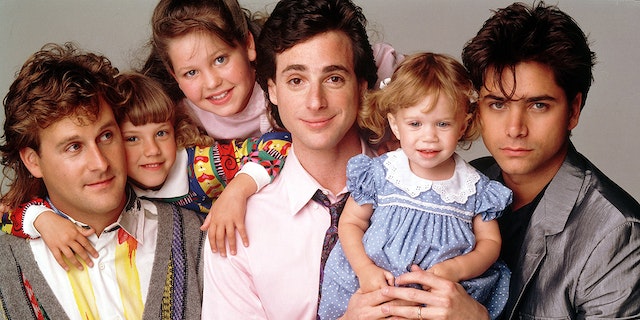 More than anything, though, Full House has continued to dole out the laughs and teachable moments via its original episodes -- nearly 200 compulsively watchable half-hours of Michelle Tanner catchphrases (“You got it, dude.”) and T.G.I.F. memories.

What’s the best way to binge on the antics of the extended Tanner clan?

Well, you could watch -- or re-watch -- all 192 episodes. But assuming you want to free up some time so you can, you know, binge Netflix’s Fuller House, or maybe think good thoughts for Stamos’ proposed Full House prequel, then you should check out our curated list of Full House's five essential episodes -- the must-see stories that define the series, if not our very pop-culture times.

Check out our picks below. We’ll even tell you where you can stream the episodes online -- right now. As Uncle Jesse, Full House’s other catchphrase god would say, have mercy!

It all begins here. Everything that makes the show weird and wonderful, and weirdly wonderful: like, the opening credits’ non-ironic use of the Dom Casual font; the iconic shot (also from the opening credits) of the Tanner children, including itty-bitty infant Michelle, in a top-down convertible -- with not a shoulder harness or seat belt in sight for the two older girls; and, Danny Tanner’s ability to smile and carry on in a state of perpetual bemusement a mere 90 days after the death of his wife and mother of his three, improperly secured children.

Are we laughing, or are we calling the authorities? We’re laughing! The unenlightened 20th century is hysterical! You’ll want to see Uncle Jesse and Joey diaper Michelle in a roll of paper towels again and again!

It’s Kimmy Gibler’s birthday, and D.J. throws her a surprise party -- only (d’oh!) Stephanie spoils the surprise, and then Kimmy spoils the night by inviting a couple of older, supposedly cooler girls. (“They wear makeup,” Kimmy tells D.J. “They can call me whatever they want.”) While Kimmy and D.J.’s friendship hits the rocks, Full House hits its stride with this relatable tween tale -- and with the introduction of Rebecca (“Call me Becky”) Donaldson, Danny’s new co-worker at his new gig, Wake Up, San Francisco.

Lori Loughlin, who plays Rebecca, aka Becky, will become a main cast member in Season 3, see her character marry Stamos’ Uncle Jesse in Season 4 and remain with the franchise right up until 2019’s college-admission scandal put her Hollywood future -- and Fuller House gig -- in doubt. But in this episode, she’s just Becky -- and you’re just transported back in time.

Stream “Tanner vs. Gibbler” on Hulu (subscription required), or purchase to stream on Amazon, Google Play, iTunes, Vudu and YouTube.

D.J. wins two tickets to a Beach Boys concert, and, because she’s a TV character and not a real young person of the 1980s, she’s super-excited. The problem is D.J. can’t decide who to make her plus-one. Enter the Beach Boys -- their very own middle-aged selves! They show up at the Tanners’ door, and invite everybody to their show! Not only that, they invite the whole family, plus Joey, to join them on stage! Has there ever been a more sitcom-y sitcom episode ever?

While you ponder that, let us also suggest that while you’ll watch this episode for the spectacle of the Tanners harmonizing on “Kokomo,” you’ll come away with something far more profound: the sight of Brian Wilson, the Beach Boys genius behind Pet Sounds, looking as if he’s being held hostage on a Hollywood sound stage. From beginning to end, this episode is a must-be-seen-to-be-believed gem.

In September 1989, when this episode first aired, Mary-Kate and Ashley Olsen were 3 years old -- and the biggest toddler stars in all the land! Though at this point they had not yet branched out into their running their own media empire -- and sitting for their first Entertainment Tonight interview! -- they indeed had already begun to take over Full House. With this episode, the Olsens’ Michelle even gets her first catchphrase, “You got it, dude,” or as the pint-sized Mary-Kate (or Ashley) Olsen pronounces it here, “Got it, dude.” Television history has never sounded cuter.

Stream “Back to School Blues” on Hulu (subscription required), or purchase to stream on Amazon, Google Play, iTunes, Vudu and YouTube.

In the 1990s, when the world was young, and the corporate synergy between ABC and Disney was new, a lot of sitcom families went to Disney World. But only Michelle Tanner got to be the theme park’s “Princess of the Day.” It’s a title, the show tells us, that comes with three wishes. Because happy-go-lucky Michelle is her father’s daughter, she does not wish for her dead mother to come back to life. Instead, the girl engages in classic Disney wish-fulfillment (No lines! A tea party! A parade!), and we go happily along for the ride.

Stream both parts of “The House Meets the Mouse” on Hulu (subscription required), or purchase to stream on Amazon, Google Play, iTunes, Vudu and YouTube.

What are your favorite episodes of Full House? Tell us in the comments section below!

Retro
How Many of These Hard Core Stranger Things References Can You Name?