Remember all of these meme-able moments? 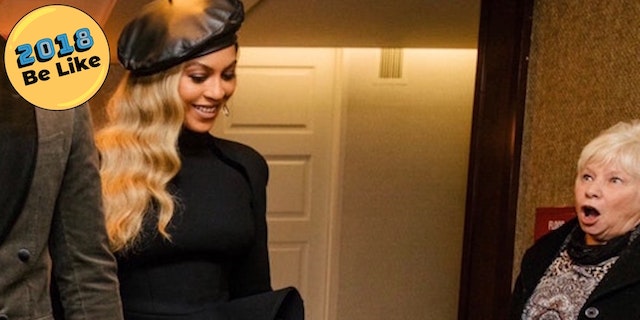 There was a lot of 😢thanks to This Is Us, Avengers: Infinity War, and, you know, the state of national politics. 👀

There was some 😮due to shocking moments on our favorite reality shows, like The Voice, Big Brother and RuPaul's Drag Race.

And we experienced true 😍 when indisputable zaddy Idris Elba was named Sexiest Man Alive and any hottie on Riverdale looked in our direction.

This year has taken us through so many emotions, and it was written all over our faces.

Which pop culture kings and queen had the biggest and best reaction faces of 2018, perfectly summing up how we were all feeling in any given emotional moment?

1. This woman who met Beyoncé.

when you realize you're lucky to be alive during the same era as Beyonce pic.twitter.com/eEuYKkOHkL

Queen Bey herself shared this hilarious snap on her Instagram earlier this year when a shocked woman spotted Bey and Jay-Z at their hotel during Grammys weekend. This woman is all of us, wondering how we're so lucky to have been alive during an era of greatness.

What realization did Jennifer Garner just come to? pic.twitter.com/pWtycEDEVs

The actress was caught going from happily applauding to sincerely confused during the 2018 Academy Awards broadcast, becoming one of the night's most meme-worthy moments.

LeBron James was rightfully disappointed in J.R. Smith's huge Game 1 error during the NBA Finals, and as a result, this became one of the biggest reaction GIFs online this year.

Who could forget the look of horror on these queens' faces when Asia O'Hara butterflies didn't quite take flight during her lip sync performance to Janet Jackson's "Nasty"?

Watching Swaggy C. propose to Bayleigh on Big Brother 20's finale was super romantic, but it's the shocked cast members behind them that take the cake for reality show reaction faces this year.

The only thing more exciting than meeting and taking a selfie with Justin Timberlake is then totally tuning out to post in on the 'gram, right?

7. Jennifer Hudson on The Voice.

One of the most exciting parts of watching Season 15 was seeing the Oscar winner's over-the-top reactions to the show's singers.

Another viral sports moment? You bet! Kaileigh Thomas, an 18-year-old LSU student, earned herself some internet fame this year when her team was down by 22 points in the third quarter of a game against Alabama.

One of the saddest movie moments of the year (and one of the most meme-d Infinity War moments) was watching Spider-Man tell Tony Stark "I don't feel so good" before evaporating into dust. 😭

Meghan Markle looked like an IRL Disney princess during her nuptials to Prince Harry. This reaction face to her veil being lifted was one of the most 😻of the year.

SHUT UP!
The 10 Most Shocking Blind Auditions Moments on The Voice Season 15