Modern Family Is Trending: Find Out the Shocking Reveal in the Newest Episode! 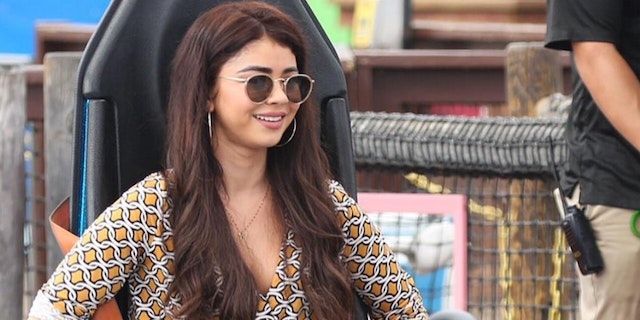 ABC's Modern Family has been hitting fans with huge episodes in what may be the series' final season.

Earlier this season, the series said goodbye to a DeDe Pritchett (Shelley Long), who passed away during the Halloween episode. She was the ex-wife of Jay (Ed O'Neill).

Modern Family actress Sarah Hyland admits the episode got to her. "It made me cry," she told ET.

Now, Hyland has her own shocking storyline of her own—in last night's episode it was revealed that her character, Haley Dunphy, is pregnant!

Hyland followed up the surprising news with an Instagram pic of her fake bump:

Well I guess the cat’s outta the bag!!! Or more like the bump’s outta the shirt!..... that was a horrible joke. I apologize.

In the Nov. 7 episode, "Did the Chicken Cross the Road?," Haley and her boyfriend Dylan (Reid Ewing) are enjoying a bumper car ride at a carnival. After accidentally getting a tube of lipstick stuck up her nose, Haley heads to the hospital and is told she's expecting.

And the surprises don't end there: the baby could be Dylan's or Haley's ex Arvin (Chris Geere) could be the father.

So, what do Modern Family fans think of the news?

CUTE
Kelly Ripa Is Trending: Here's What You Need to Know

RIP
Can You Name All of These Dead GoT Characters?