Lady Gaga? Christian Bale? Regina King? Sandra Oh? They're cool. But only one person made the biggest splash of the night. 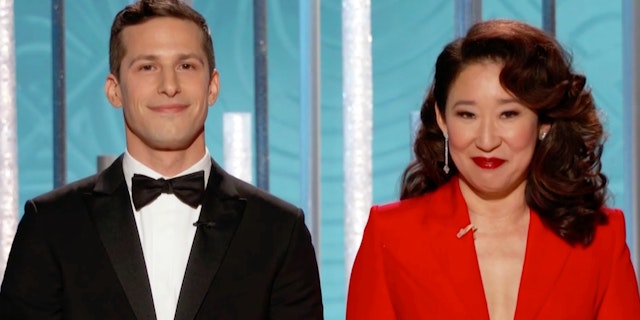 The stars came out to drink for the 76th Annual Golden Globe Awards, and the room was full of winners.

Sandro Oh hosted like a boss with Andy Samberg and also took home Best Actress in a Television Drama.

Rami Malek scored a globe for his portrayal of Freddie Mercury in the now Golden Globe-winning film Bohemian Rhapsody.

But the real winner of the night was crowned long before the celebrities took their seats to munch on sandwiches and drink champagne.

A star was born on the Golden Globes red carpet, and that star is the Kelleth Cuthbert.

Oh, apologies: You might know her as the "Fiji Water Girl."

As paparazzi snapped pics of stars such as Jim Carrey and Alyssa Milano, a pattern emerged.

Serving water? Oh honey, miss thing is serving 𝓵𝓸𝓸𝓴𝓼! 💦 No one is working harder at the #GoldenGlobes than the Fiji water girl. 😂😂 pic.twitter.com/oAtyhKqv63

Not the worst way to spend a Sunday... #goldenglobesfijigirl #fijiwatergirl

The internet applauded her ability to come through drippin'.

The fiji water girl is serving LOOKS. Opportunity seeking at its finest. Get it queen! pic.twitter.com/LfgiKvG3bQ

#fijiwatergirl 😂 you know all the paparazzi are YELLING at her to move. She’s a strong woman. Supposed to be hydrated everyone but she’s the thirstiest one on the carpet! I love you Fiji water girl! #anewstarisborn #firstmemeof2019 #GoldenglobeAwards2019 pic.twitter.com/2ZMnYbX4j7

Though she's going home with a bottle of recyclable plastic instead of a prized hunk of golden medal, she's the biggest winner of the night in our eyes. Way to look fab while keeping our favorite celebrities hydrated, Fiji Water Girl!

MEMORIES
10 Best Things That Happened in 2018