Everything You Need to Know About 'Love Island' Host Arielle Vandenberg

Eat your heart out, Chris Harrison 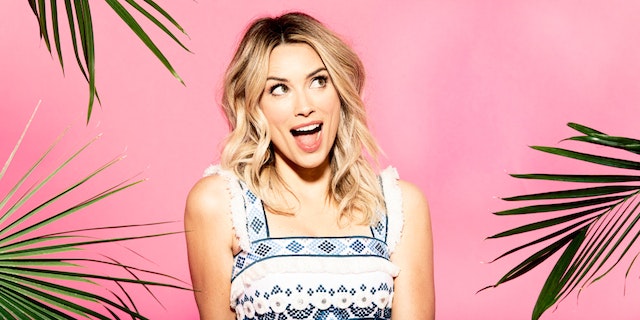 The leggy blonde with a wicked sense of humor is there to lead Islanders through the dating competition series as they couple up, break up and get sent home.

However, this is not the first time Vandenberg has graced screens both big and small. You've seen her in a variety of places, from viral internet videos to movies to arms of your favorite rock star.

Keep scrolling for absolutely everything you need to know about Love Island host Arielle Vandenberg.

Vandenberg was born and raised in sunny Fallbrook, California. She now lives in Los Angeles.

My eyes are up here.👀

Before she was the host of Love Island, this gorgeous girl showed off her goofy side in six-second videos with the likes of Brittany Furlan, Matt Cutshall and King Bach.

Now that Vine is gone, Vandenberg has taken her talents to Instagram.

We all know THIS woman from the dog park. 😐🐕

4. She hosts a super sweet podcast

It's called The Only Child after the fact that Vandenberg herself is an only child.

She mainly interviews her celeb friends, such as Wells Adams from The Bachelorette and Bachelor in Paradise, Bruce Willis and Demi Moore's daughter Rumer Willis, model Ireland Baldwin and more.

I can’t wait to see this maniac tomorrow! ❤️❤️❤️@stylelvr

A post shared by Arielle Vandenberg (@theonlychildpodcast) on May 5, 2019 at 9:53pm PDT

5. Arielle has been in a LOT of ads and commercials

Whether you've been flipping through a magazine or changing channels on your TV, you've likely seen Vandenberg in print and digital ads for American Express, Airbnb, Venus razors, TJ Maxx, Old Navy, Garnier Nutrisse and more.

Throw back to when I could apparently dunk a basketball...oh yeah, and when I was on this billboard!

6. You might also recognize her from some of your favorite TV shows

She's had roles on How I Met Your Mother, Greek and Meet The Browns.

7. She's also been in a few movies

Vandenberg has appeared in Nerve, The Ugly Truth and Epic Movie.

Most notably, Vandenberg dated Arctic Monkey's front man Alex Turner from 2011 to 2014. She is said to have been the muse for the song "Arabella" on the Arctic Monkey's album AM. She can also be spotted in the band's music video, "One For The Road."

Since then, she briefly dated actor Will Arnett.

9. Her BFF is a CW celebrity

Nina Dobrev of The Vampire Diaries is Arielle's IRL bestie.

She frequently makes appearances on Vandenberg's Instagram and has been featured on The Only Child podcast.

I couldn’t be more obsessed with these two smiles! Sweet babe @nina came and graced us with her presence on this weeks episode of the podcast!! I loveeee her!!! @nina, will you marry me?💍

It's customary for the Love Island host NOT to get involved with the Islanders anyway, but Vandenberg REALLY won't be looking for love in Fiji because she's found it in Los Angeles with former Vine star and current boyfriend Matt Cutshall.

The hilarious duo have been dating since 2017.

I have the most supportive cutie. We’re so lucky to get to spend so much time together for work and for play!!! I’m grateful for him everyday, even if he does wears aqua socks.😳❤️😍🏝💕

Vandenberg is a true Belieber.

She has dressed up as the "I Don't Care" singer for more than a few occassions.

Today is Justin Bieber‘s birthday! And we all know I love to Beliebe - So here are few pics of me dressed up like him. I LOVE YOU @justinbieber HAPPY BIRTHDAY!!!🎈🎉🎂 😍

OVERDOSE
Quiz: Do You Watch Too Much Netflix?