For every fabulous fashion moment there were a few faux pas as well. 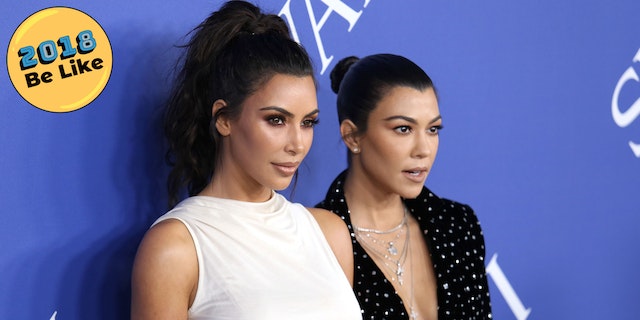 It was a good year to be a Kardashian.

The famous family had tons of great moments in 2018.

(*This is not accurate math.)

However, they had a few 😬moments too, and we've rounded them up for you.

These are the worst Kardashian moments of 2018:

Kim and Kourtney Kardashian's fight on the Season 15 premiere of Keeping Up With the Kardashians was truly intense and continued through the season. The conflict over scheduling the family's annual Christmas card photoshoot escalated into Kim calling her older sister the "least exciting to look at." Ouch, Kim!

This year, Khloe Kardashian celebrated Thanksgiving away from her sisters and mom. “Khloe put together an incredible Thanksgiving dinner in Cleveland with Tristan," a source tells ET. "They had a bunch of friends join them and celebrated what they are most thankful for this year, True." Link in bio. (📷: @khloekardashian)

A post shared by Entertainment Tonight (@entertainmenttonight) on Nov 23, 2018 at 4:01pm PST

Khloé Kardashian and Tristan Thompson welcomed an adorable baby girl in April, but unfortunately, this news unfolded at the same time as reports surfaced of Tristan's infidelities.

Though she has moved on and is enjoying the single life, it was sad to see Kourtney and her former boyfriend of two years, Younes Bendjima, end things in August. Weren't they cute?

The rapper got a lot of attention for his comments while visiting (and hugging things out) with Pres. Donald Trump this year. He later said he's "distancing" himself from politics after being "used to spread messages" he doesn't believe in.

The model got in a bit of hot water this year with when she told Love magazine: "Since the beginning we've been super selective about what shows I would do," she said. "I was never one of those girls who would do, like, 30 shows a season or whatever the f—k those girls do. More power to 'em." Some fellow models, aka "those girls," took offense to the statement, because they don't have the luxury of being as selective on which jobs they take. Kendall later clarified her statement.

The social media-loving Kardashian and Jenner crew occassionally faces claims of Photoshop fails on their pics. This Kim K snap, complete with a wavy background and smashed car, was one of the pics that got called out this year. Kim subsequently disabled comments on the photo.

last night i had cereal with milk for the first time. life changing.

The beauty mogul shocked fans this year when she admitted she didn't try cereal with milk for the first time until the age of 21. She added: "I always liked cereal dry, I never bothered to put milk." 👀

Kim Kardashian's not the only person to overpluck her eyebrows in the '90s, but since she shared this photo and we have it readily available, we're going to roast her about it. "I was obsessed with Drew Barrymore," Kim said. Hey, at least they grew back!

CATFISHED!
10 Catfish Reveals So Shocking You'll Freak the F Out! 😲!

The Worst
The Worst of Everything 2018