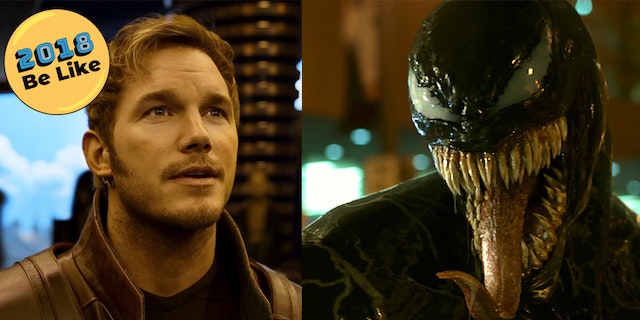 It sure isn't easy being a compelling hero (or villain).

For every amazing superhero — Black Panther, Captain America and  Deadpool — there's an equally awful one — Iron Fist, Vision and Venom.

But which power-infused good guy (or woman) is the worst of the year? You know, the hero who, instead of inspiring you, really just makes you laugh and, perhaps, cringe.

Below we've compiled our ranking of the worst superheroes — from Tom Hardy's portrayal of Venom to multiple members of the Avengers — in 2018, based on who disappointed us the most.

A Spider-Man spinoff with no friendly neighborhood Spidey, Venom plays more like a dark buddy comedy than a superhero film. Sadly, the symbiote is plagued by dumb choices and tacky dialogue throughout the movie.

According to TheWrap, Tom Hardy “finally found a project he can’t overcome by sheer talent.”

The Star-Lord we know and love from Guardians of the Galaxy was absolutely not the same man who was arguably the worst part of Infinity War. Usually an overconfident yet lovable renegade, Peter Quill was an emotional liability when he ruined Iron Man and Dr. Strange's plan to remove the Infinity Gauntlet from Thanos. And it would've worked if that pesky Star-Lord didn't screw it all up.

If Star-Lord was the worst aspect of Infinity War, then the "love story" between Vision, an android, and Scarlet Witch, one of the Olsen sisters, was not far behind. And although Vision has the Mind Stone ripped from his dome, he'll reportedly be a big part of the upcoming Scarlet Witch series.

Mr. Incredible, like Star-Lord, is a shell of his former self. Despite still possessing superior strength and invulnerability, Mr. Incredible struggles to transition to stay-at-home dad while his wife, Elastigirl, is the face of a new campaign to regain public trust in superheroes. How incredible can you really be if you're not so great at being supportive of your wife?

There might not have been a bigger disappointment in Infinity War than the Hulk. In a frustrating twist, the big green monster makes an appearance in the Marvel film but he quickly becomes terrified of the Mad Titan Thanos and subsequently disappears. Although we're big fans of Mark Ruffalo (who isn't?!), we came to see the Incredible Hulk, not the star of Now You See Me 2.

Like the Hulk, Loki's role in Infinity War was pretty limited. Unlike the Hulk, it's because Loki gets choked out by Thanos. While alive, Loki does try to save his brother, Thor, by betraying the Mad Titan. Unfortunately, it's a terrible attempt that costs him his life.

Somehow people had a hard time relating to Danny Rand, a billionaire Buddhist monk and martial artist who has the ability to summon the mystical power of the Iron Fist. Shocking.

“Rand ... is about as exciting as a slice of Velveeta cheese left out in the sun too long,” according to Variety.

The poor city of Gotham is consistently overrun by villains — from the Joker to the Penguin — yet all Bruce Wayne, y'know the Batman, will do is read a darn book. The city needs to be saved by the Caped Crusader already.

The head of the Inhuman Royal Family, Black Bolt isn't a very interesting hero because he does not speak. That leaves Bolt to either use his own made-up sign language or to stare really intensely at people.