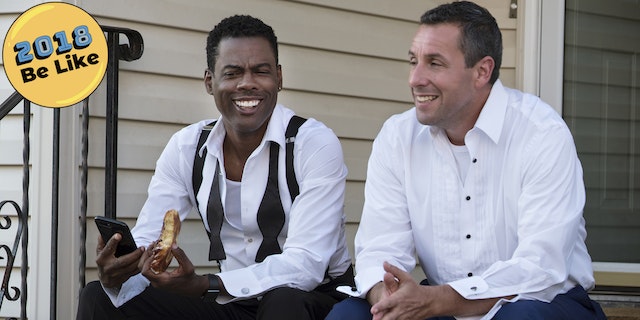 Well, they can't all be winners.

Netflix has tons of great titles streaming this year. (Plug: Check out our list of the 10 best Netflix obsessions of 2018.)

Alas, there are also some total bombs on the streaming service this year.

That overhyped Cloverfield movie that ended up being a total bust? You bet that's on the 'worst' list.

A family-friendly sitcom starring Rev. Run that is embarrasing to be caught watching? Uh huh.

Don't even get us started on the latest "comedy" movies from Adam Sandler and David Spade. Oof.

Sure, it's fun to celebrate the best the streaming giant has to offer, but let's take a moment to highlight the worst movies and TV series Netflix has dropped into the public's collective queue in 2018.

Here's our list of the 10 worst Netflix originals this year:

This dark revenge comedy, starring Debby Ryan as a teen who dropped pounds and is out for payback, has received plenty of backlash online—yet, it has been renewed for a Season 2.

"If you're watching this, you really need better things to do," says Washington Post reviewer Hank Stuever.

2. Father of the Year

According to Movie Nation's Roger Moore, it's "a throw-away movie, and an utter waste of time, another make-work project for Sandler's less and less funny stable of pals."

It's true: Even Marvel can make something that isn't awesome. It has many flaws, chief among them is the fact that it's just plain boring. Iron Fist was cancelled this year after its second season was released.

4. All About The Washingtons

It's Season 1 and done for Rev. Run. This formulaic sitcom, which is way too generous with its laugh track, can't compete with standout series like One Day at a Time. All About The Washingtons will not be returning for a second season.

The Hollywood Reporter's Dan Fienberg calls it "a flat, lackluster dud given a full season to prove very conclusively that being a great reality TV personality isn't the same as being an actor."

John DeFore, of The Hollywood Reporter, labels it "a trainwreck of a sci-fi flick bent on extending a franchise that should have died a peaceful death almost exactly one decade ago."

Sometimes a series just doesn't need a second season. Unfortunately, 13 Reasons Why got one... and they spent every episode talking about what happened in Season 1.

Cosmopolitan writer Lauren Hoffman agrees: "There was no good reason to bring 13 Reasons Why back for a second season."

13 Reasons Why actor Dylan Minnette has another Netflix fail on his conscience this year. The Open House is a bland horror flick that fans have lambasted on social media for its disappointing ending.

"It winds up being both tired and tedious, two sins no horror movie can survive," says Decider reviewer Jade Budowski.

Chuck Lorre's stoner sitcom, centered around cannabis dispensary owner Kathy Bates, isn't funny even if you're high. The series was canned after dropping its first two batches of episodes.

Brian Lowry of CNN.com has this to say about the series: "There's not enough weed in the Golden State to wring consistent laughs from a show that's mostly as stale as an unwashed bong."

Adam Sandler may have made our list the 10 best Netflix obsessions of 2018, but he's also on our worst list as well. His latest straight-to-Netflix flick, this time costarring Chris Rock, is about two dads who need to get along for their kids' wedding.

"There's no way audiences would pay to see The Week Of at a theater," says Newsday's Rafer Guzman. "Even streaming it might feel like a rip-off."

A high schooler who has never-been-kissed goes after her best friend's older brother in this dated, predictable tween rom com.

Uproxx critic Dustin Rowles writes: "I can confirm that it's not a good film. In fact, its themes are at times unsettling."