We picked our fave contestants from Big Brother, Survivor, Keeping Up With the Kardashians, Vanderpump Rules and more. 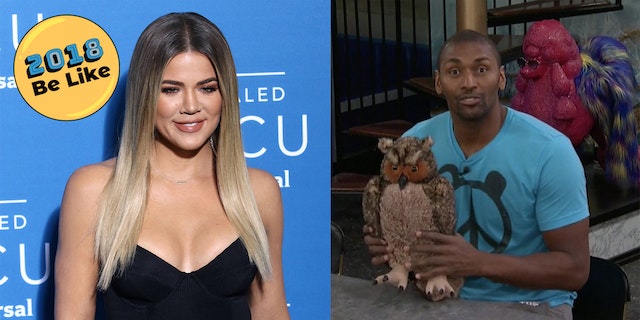 And what makes incredibly compelling TV? The characters, of course.

This year gave us some fun new contestants on Big Brother, Survivor and RuPaul's Drag Race, while the casts of classics such as Keeping Up With the Kardashians and Vanderpump Rules kept us as fascinated as ever.

But which reality show stars were the most entertaining in 2018? The answers to all your questions lie below...

As we said back in February, Metta World Peace is the best part of Celebrity Big Brother. And — even though the former NBA player didn't really want to be in the house or understand the rules of the game — we stand by what we said.

9,8. Val Chmerkovskiy and Jenna Johnson (Dancing With the Stars)

This ridiculously good-looking duo, who met while filming DWTS, finally decided to take their relationship to the next level in 2018. Just by perusing the happy couples' Instagrams, it's clear these two reality show stars really love each other. They narrowly missed the cut for our best celebrity couples of the year.

7. Khloé Kardashian (Keeping Up With the Kardashians)

It was quite the year for the Kardashians, especially Khloé. But, in the end, she has an adorable new baby, a hit TV show, a 🔥Instagram and a faithful boyfriend. And she's not the least exciting Kardashian to look at, either.

There are plenty of hilariously entertaining stars on Vanderpump Rules, but nobody comes close to Lala Kent. The unapologetic straight shooter doesn’t hold back on the Bravo show, but she believes in giving the people she cares about a second chance.

Nailed It!, the Netflix show that celebrates baking failures, is one of the best and most hilarious things on TV, and that's mainly because of the host, Byer.

In what is turning out to be one of the best seasons of Survivor ever, it's Christian — the factorial-loving robotics scientists — who has emerged as the clear fan favorite.

Despite multiple attempts to vote him off the island, Christian has been able to outsmart and outlast his competition, while talking Jeff Probst's ear off about a reuben sandwich, among other enlightening topics.

Sorry, Eureka O'Hara and Kameron Michaels, but it was obvious that Aquaria was the deserving winner of Season 10 of RuPaul's Drag Race. The fiery queen won three main challenges and became the first person to ever win the ball challenge and snatch game in the same season.

The gregarious Kaycee proved to be the best Big Brother player of the year when she narrowly defeated the scheming Tyler in the 20th edition of the CBS show.

Kaycee showed that it is, in fact, possible to play the game without having to lie, cheat and backstab her way to $500,000.

All we have to say about our beloved champion is... LETSGOOOO!

Honestly, any of the men on the Netflix reboot Queer Eye could make this top-ten list, but it's the grooming expert, Van Ness, who makes the show shamazing.

He might call you "basic, basic, basic" and struggle to drive a car, sure, but the show wouldn't be the masterpiece it is without Jonathan.

Win!
We're Giving Away a MARVELous Superhero Prize Pack! All These Movies Plus the Gauntlet

The Worst
The Worst of Everything 2018