These are the Netflix originals people can't stop talking about. 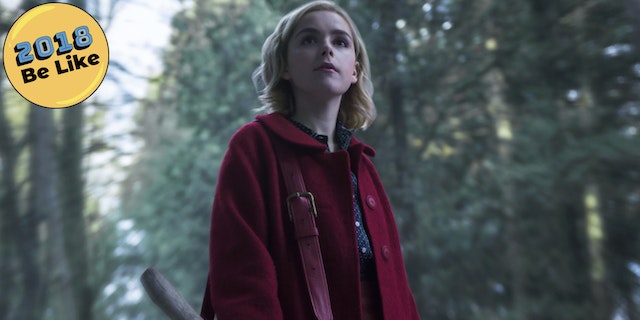 It has been a huge year for streaming.

Remember when everyone was tweeting and crying over Queer Eye?

Or how pumped we all were for Season 2 of Marvel's Jessica Jones?

Those weren't the only Netflix originals fans couldn't wait to binge-watch in 2018.

The streaming giant dropped everything from adorable romantic comedies to addictive new docuseries.

Which originals were fans totally obsessed with (in a good way) this year?

No Netflix series will take you on an emotional rollercoaster quite like Queer Eye. You'll laugh, cry and want to be besties with every single member of the Fab Five.

2. The Chilling Adventures of Sabrina (Season 1)

This dark, coming-of-age tale has cast a spell over fans. Who knew streaming a series centered around satanists could be so fun?

Collider critic Allison Keene says: "It's a delight and an obsession, and the scariest thing about it is just how good it is."

3. To All the Boys I've Loved Before

Netflix has been killing the game in 2018 when it comes to heartwarming romantic comedies that will hit you right in the feels.

Nell Minow from RogerEbert.com labels this wonderful YA watch as a "delightfully adorkable time."

4. The Haunting of Hill House (Season 1)

A good series will stick with you... and based on the nightmares induced by this creepy new original, Hill House is a show that will haunt viewers for a long time.

"The Haunting of Hill House contains some of the most unforgettable horror imagery in film or television in years. The best horror film of the year also happens to be one of the best TV shows of 2018. Don't miss it," writes Brian Tallerico of RogerEbert.com.

The women of GLOW return with a dynamic second season, perhaps even better than the first.

IndieWire reviewer Ben Travers has nothing but praise for Season 2: "It's the rare series that tries to have it all and succeeds. It's topical and fun; it's exciting and poignant; it's got long episodes and a short episode total; it's got a standalone episode told from one viewer's perspective and fully drawn supporting arcs; it's inclusive from every angle, addresses issues of inclusivity, but doesn't define its minority characters by those issues."

Luke Cage and Iron Fist may have been cancelled this year, but Jessica Jones is still kicking butt as arguably the best Marvel character on Netflix right now.

Will Arnett's animated comedy may be five seasons deep, but it's still going strong as one of the top comedies on the streaming platform.

Another romantic comedy that had fans of the genre standing up to cheer this year was the super sweet Set It Up — a story of two overworked assistants who play matchmaker for their workaholic bosses. Oh, and there's pizza.

"Set It Up is a classic rom-com brought to life by a pair of wonderfully well-matched stars who seem to revel in the genre," says IndieWire's Kate Erbland. "This is cinematic comfort food, the kind we've been starving for."

Yes, Adam Sandler made the Best Of list for this year... though it's not for one of his movies. The comedian's first stand-up special in decades has been met with a surprising amount of praise, as it has more laughs than most of his films from the last 10 years combined.

"Most importantly, Sandler is clearly having fun. His spirit flows out of the special, and it reminds you of the Sandler we all used to love," writes USA Today's Kelly Lawler.

Following in the footsteps of Netflix's true crime hits, like Making a Murderer Season 1, The Staircase keeps viewers guessing as they learn the details of a North Carolina murder case.

The New York Times' Maureen Ryan writes, "The Staircase, ruminative and humane to the end, remains one of the finest examples of this genre."