They're so bad that they're good. 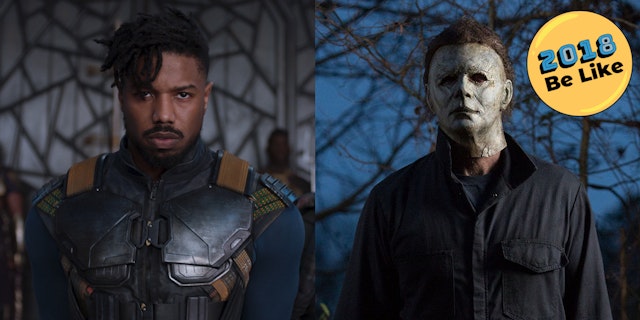 An awful evil-doer can torpedo a movie or TV show quicker than the Meg can sink a boat — which coincidentally makes the ‘best’ list.

While a truly evil bad guy — such as Avengers: Infinity War’s Thanos and Black Panther’s Killmonger — can turn your favorite movie into a classic because they are so darn good at being bad.

But who's the best at being bad this year?

Sprinkled in through a decade of Marvel Cinematic Universe films, Thanos’ true villainy was a big question mark… until he showed off his devastating power in Avengers: Infinity War. The Mad Titan proved to be every bit as evil as imagined, especially when he snapped his fingers and disintegrated half of the universe’s population.

Don't believe us? CNET says “Thanos is the greatest Marvel Cinematic Universe villain, period and he is fricking awesome -- nutsack chin and all.”

If this big, bald baddie plays his cards right in the upcoming Avengers, he could top this list next year, too.

You really aren’t supposed to like villains as much as Michael B. Jordan’s portrayal of Erik “Killmonger” Stevens in Black Panther. A former black ops soldier, the half-Wakandan overthrew his cousin T’Challa and ruled Wakanda. And for a moment we all kind of hoped that the next hour — and perhaps the next two sequels — was just Killmonger taking over the world.

The Washington Post says, “Erik Killmonger’s reign on the Wakandan throne was short-lived, but he is now the undisputed king of MCU antagonists.”

If it wasn’t for Thanos, Killmonger would be the runaway favorite for the year’s best bad guy.

Forty years after scaring the crap out of your parents and grandparents, Michael Myers resumes his bloody killing spree.

The masked killer’s return was so good that there’s already a sequel in development.

Whether it’s his frightening face, the way he eats a soft-boiled ostrich egg, or his delicately terrifying voice, Teddy Perkins is the creepiest villain on television this year.

In the episode, poor, sweet Darius drives to a pseudo-Neverland-Paisley Park murder house to pick up a free piano. Ultimately, Perkins — portrayed by Donald Glover — plans to murder Darius, although he escapes sans piano.

“Teddy Perkins is the stuff of nightmares,” according to IndieWire.

And it looks like Perkins actually survived the events of Atlanta because he definitely showed up at this year’s Emmys.

A ruthless and intimidating businessman, Lodge will threaten and manipulate anyone in his life — from his wife and daughter to Archie Andrews — to get what he wants and cause chaos in the crazy town of Riverdale.

io9 says that Lodge is their “favorite character on the show.”

Don’t be fooled by the Commander. He might initially come off like he’s a kind man who is a victim of Gilead, but that’s what makes Commander Fred so bad — he uses his power over people in sick and diabolical ways.

Vice believes that he might be *too* evil, saying “every smile is shark teeth, every line brushed with cod liver oil. This Commander knows exactly what he's doing.”

Oh, you thought the shark in Jaws was a monstrous killing machine? The Megalodon — aka the Meg — makes great whites look like mediocre whites in the vast ocean.

Believed to be extinct for millions of the years, the prehistoric predator is the largest shark EVER — not like you needed another reason to avoid going into the ocean.

A sequel to The Meg — The Megs?! — is already in development.

A drag queen who had to medically depart the show last year, Eureka — like a phoenix from the ashes — returned for Season 10 of RuPaul’s Drag Race.

Despite finishing as the runner-up, the controversial drag performer believes she actually won the competition — which is exactly what a true villain would say.

We’re not sure if it’s his big muscles or that terrorizing-ly thick mustache, but August Walker is the most intimidating bad guy in the Mission: Impossible franchise. A CIA agent who doubles as an undercover terrorist trying to end the world, only Superman could play a brute that’s so evil and frightening.

Entertainment Weekly says that it’s a “wonderful performance by Cavill.”

It was a good year to be a Marvel villain. Ghost — otherwise known as Ava Starr — became a stealth operative after gaining the ability to become intangible. Although she’s not on the level of Thanos and Killmonger (who is?), Ghost is still a step up from a majority of Marvel baddies.

Haha or AH
Are These Clowns Terrifying or Just Plain Trash?

Baby Face
Can You Guess How Old This Actor Playing a Teen Really Is?